The northernmost rally on earth is more than just a 7,500 km tour through 10 countries, including Finland and Estonia. In fact, it even takes participants as far as the North Cape, and in winter no less! However, the harsh weather conditions go hand in hand with a strict set of rules, too – all vehicles must be at least 15 years old, and no GPS or navigation devices are allowed. The use of motorways is also looked down upon on the Baltic Sea Circle Winter Edition. And yet there is another aspect to the rally besides team spirit and driving skills, as it also has a noble cause – each team must collect 750 euros in donations. In among the adventurers who took part in the last Baltic Sea Circle Winter Edition (held from 23 February 2019 to 10 March 2019) was Team Steakholder from Cologne. And in its arsenal of equipment was a very presentable roof rack made of black aluminium profiles from item. 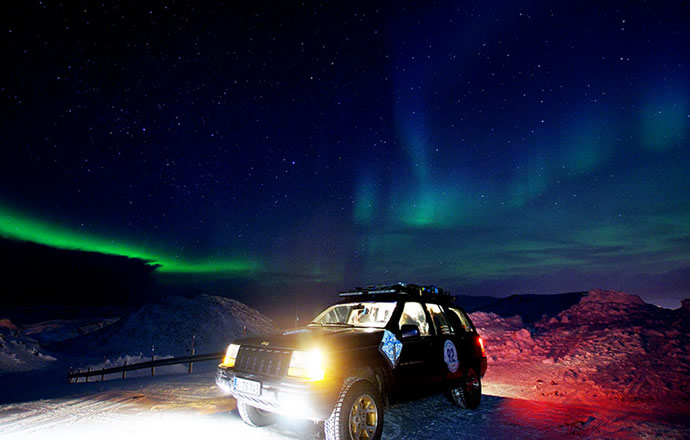 The Norwegian town of Honningsvåg offers unforgettable views of nature.

Achieving goals together for a good cause

Sven Pleines is an electrical engineer and in 2014 – while still a student – participated in a similar rally hosted by another organiser. What he most appreciated about that race was the way all the teams pulled together and were willing to help one another. When he told his wife and brother he was thinking about taking part in the Baltic Sea Circle Winter Edition 2019, they thought it was a great idea and were on board straight away. One of the reasons for their enthusiasm was the charitable side to the rally. “We told ourselves we could get 750 euros in donations, but we set our actual target at 1,500 euros. And that’s exactly what we raised,” says Sven proudly.

The money they collected went to the projects “Flucht und Asyl im Klassenzimmer – Ein Bildungsprojekt für Kölner Schulen!”, which works with schools in Cologne to educate schoolchildren about refugees, asylum and human rights, and “One Earth – One Ocean e.V. – Plastikmüll aus dem Meer fischen und verwerten”, an initiative that aims to remove plastic waste from the oceans and recycle it. While the team put up the money needed to buy its used Jeep Grand Cherokee itself, like most of its competitors, it relied on sponsors to provide the rest of its equipment. Since any proper off-road gear has to include a robust roof rack, the team set out to find the perfect one for them. As it turned out, ideas for luggage carriers based on aluminium construction profiles were already circulating within the off-road scene. “We simply approached item with our idea and were thrilled to be met with such positivity,” says Sven.

Prior to meeting with item, Sven had already been considering a concept for the design of the roof rack and how it would be attached to the team vehicle. However, the flexibility of the MB Building Kit System offered even more options for both aspects than he had initially thought. For example, the team was able to move struts so they could open the sunroof or lay out all their gear – which included spare tires, a petrol canister, camping chairs and additional lights for adverse conditions – perfectly.

The black, screw-fixed roof rack often proved very popular with onlookers, as Sven points out: “We got a lot of encouragement, with people asking how we did it. We certainly weren’t expecting that!” Unlike Team Steakholder, most of the teams participating in the 2019 Baltic Sea Circle Winter Edition opted for steel or iron structures, which require expensive welding work and are much more limited. Using aluminium, on the other hand, opens up a wide range of opportunities: “I was thoroughly impressed by the versatility and, of course, the stability. Once everything’s screwed on, the whole thing’s as steady as a rock,” says Sven, summing up his experience with item profile technology. 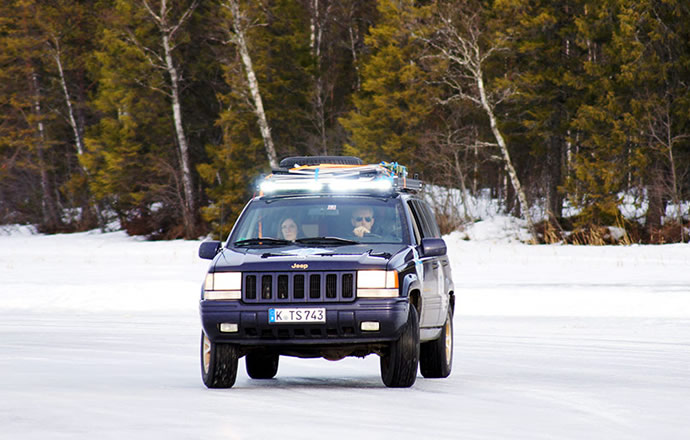 An additional set of lights is a must up north – they even look good in daylight.