Interactive light installation – personal messages at the touch of a button

A varied program packed with art installations, workshops and stage events had been carefully planned. However, as the coronavirus pandemic took another turn for the worse, the festival inevitably had to be called off. All the same, there was one project that could still be showcased to the public despite everything – “5×14”, the interactive light installation from Zürich-based design studio Lucid – the office for collective curiosity. It was originally to have been part of the “digital playground”, a series of innovative installations that was to have been the very heart of the festival, spread across five locations in the city centre of St. Gallen. Now, however, it would provide a very real highlight that couldn’t fail to draw the attention of passers-by. “5×14” was a series of five boxes positioned at the entrance to the town hall that had LED panels affixed to them. Each box was a large fourteen segment display, hence the name “5×14”. But what made this giant display different was that a special website allowed members of the public to change the illuminated letters to spell out new words. In the end, the installation stayed on show for longer than had originally been planned, running from 29 October to 12 November 2020. Profile technology from the item MB Building Kit System was used to construct the boxes.

Lucid, which operates as a design studio collective with flat hierarchies, specializes in interaction design. The team does not believe its chosen discipline is restricted to Internet-only projects though. Instead, it is confident that real-world spaces and the opportunities technology gives us to change these spaces can also be involved. When the festival’s organisers asked whether the company could contribute a project in the space of one month, no time was wasted in gathering together suitable ideas. Since the Swiss designers enjoy designing light installations and had the social distancing restrictions very much in mind, it didn’t take them long to come up with a truly bright idea. “We already had a few LED panels lying around and carried out some tests to see whether they could be controlled via a website. It worked really well. What’s more, if people could operate the website from their smartphones, it would be ideal for the current circumstances. Having a button that everyone would have to press was totally out of the question,” points out Marco Ehrenmann, an interaction designer at Lucid.

Users were able to enter individual letters on the website and then briefly emblazon their words on St. Gallen’s town hall. This neat trick was made possible by a light control protocol linked to an on-site computer that obtained its information from the website and a corresponding server. The information was then depicted visually on the LED panels, which were each fastened to basic frames built using aluminium profiles from item. Once Ehrenmann had seen the profile technology in action at another company that is an item customer, he very quickly decided this was the right solution for the interactive “5×14” light installation, too. “A sturdy construction was then put together for us in next to no time. A month was very little time indeed, but the commitment shown by our contact at item Switzerland was outstanding. He rolled up his sleeves and got stuck in to make it all work for us,” recounts Ehrenmann. Besides structural stability and customer service, Lucid also values the modularity and flexibility of our profiles. Indeed, bigger projects based on “5×14”, which was in its own way a “proof of concept”, are already in the pipeline. Existing structures can be easily adapted and extended for new ideas. 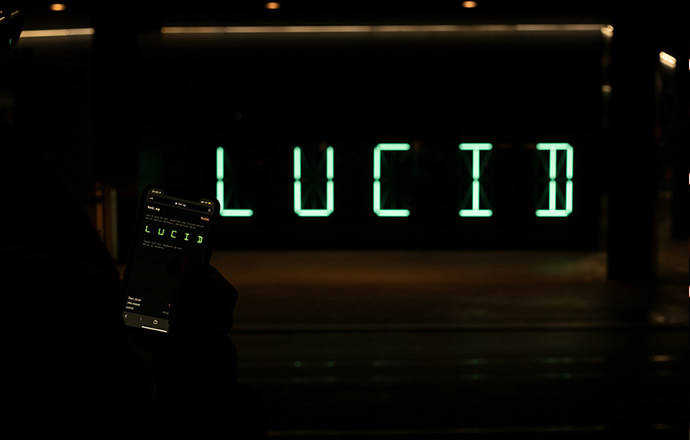 It is incredibly easy to change the sequence of letters using just a smartphone (photo: Lucid GmbH).

However, presenting an interactive light installation on a prestigious building also poses certain challenges. How do you stop people from spelling out words that have no place on the walls of a town hall? Fortunately, a practical solution was found. Every newly entered combination of characters was checked against a list of “forbidden words”. The list contained approximately 12,000 words – swear words in the five most widely spoken languages in the Canton of St. Gallen. There was also a list of positive words such as “love” and “pizza” that were acknowledged with a green light. That wasn’t the only reason why so many visitors came to appreciate the installation, as Ehrenmann explains: “The reaction from the public was excellent. There’s something magical about being able to change a large display almost in real time with a small smartphone.” After all, being dazzled by something is a pretty amazing feeling, particularly at such a dark time of year. 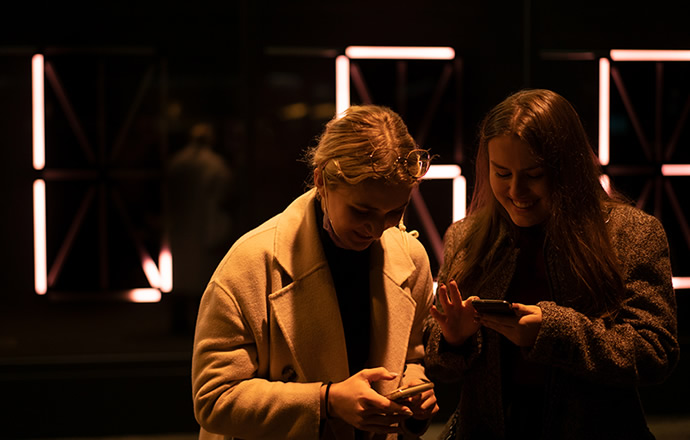 Interested in applications and solutions from item?
Then we have something that’s right up your street!
Simply subscribe to the item blog by completing the box at the top right.