When the hyperloop concept was unveiled in 2013, a global movement began.

Numerous student initiatives and companies are working hard on the hyperloop concept. This fascinating idea may hold the key to future mobility, with pods levitating and travelling at speeds of up to 1200 km/h through tubes that are maintained at a partial vacuum. Using hyperloop tubes to connect city centers could remove the need for short and medium-haul flights. A hyperloop journey from Hamburg to Munich, for instance, would take just 45 minutes, which is half an hour less than a flight. Given that the concept virtually eliminates friction and air resistance, hyperloop systems wouldn’t just be exceptionally efficient – by using green electricity, they would be able to operate on a completely carbon-neutral basis. mu-zero HYPERLOOP is a new hyperloop team from Germany. Despite coronavirus restrictions making life more difficult for them, students at the Karlsruhe Institute of Technology (KIT), the Karlsruhe University of Applied Sciences (HKA) and the University of Stuttgart have developed an innovative pod prototype with the focus placed firmly on the drive. The team of around 60 students caused quite a stir on their debut at the European Hyperloop Week. They are using profile technology from the item MB Building Kit System for the pod chassis and two test stands – and Handles Pi for transport purposes.

“The entire hyperloop concept generally depends on numerous components that don’t even exist yet in this form, so each team normally focuses on a particular aspect and tests its practical viability,” says Leonhard Döring who, in his role as Team Captain, has led mu-zero HYPERLOOP during its first year. The original KIT group quickly became a charitable association so that other universities could also join the team. Even though the SpaceX Hyperloop Pod Competition launched by Elon Musk is not currently taking place, the European Hyperloop Week has established itself as a successful European equivalent that is held annually and dictates the hyperloop scene’s planning. In less than eight months, the young mu-zero HYPERLOOP team succeeded in developing a fully functional prototype that was designed around the drive. “It’s a linear motor, so we don’t need wheels for propulsion. The special thing about our design is that, by modulating the magnetic field it generates, the motor is capable of both propulsion and levitation, meaning it can lift the entire pod,” explains Lars Ohnemus, who is responsible for all the mechanical aspects.

The pod is encapsulated by a lightweight aerodynamic shell that is specially optimized for high speeds. Beneath this shell is the actual structure, which is based on item aluminum profile technology and to which all other pod components are attached. The number one requirement was for the system to be easy to adapt during the short development period. “We were always needing to quickly change or attach something, and the profiles from item were an ideal solution for this. As a result, we were able to develop the pod much faster,” emphasises Ohnemus. In addition to this, using the item Engineeringtool to create their design and obtain the necessary machined components saved the hyperloop team several weeks. Two different test stands – both largely made from profile technology – were also required to characterize the system’s behavior. For example, one of them maps and tests the motor’s performance on a smaller scale. 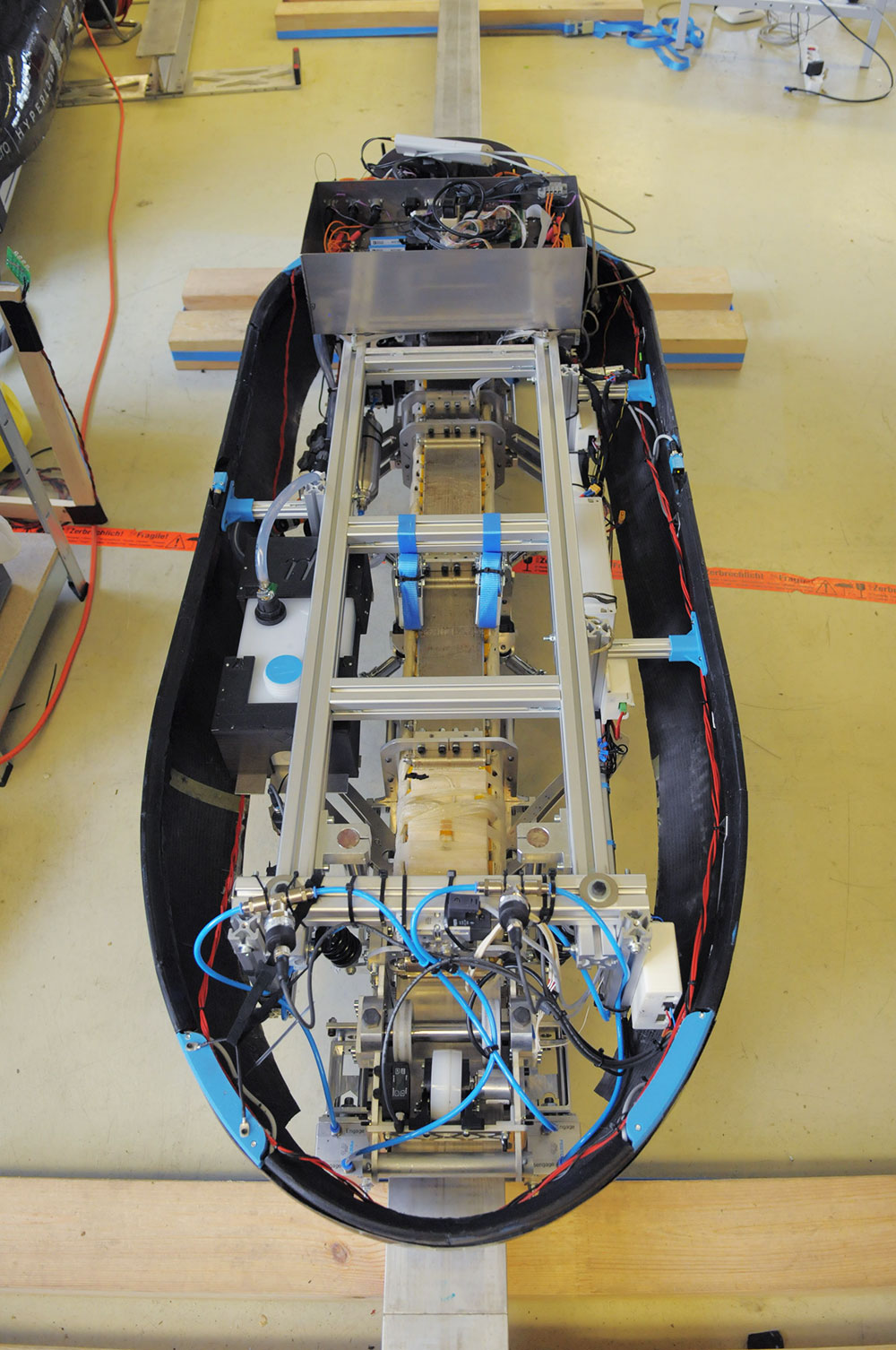 A view of mu-zero HYPERLOOP’s open pod shows that the frame consists of profile technology from item.

The team eagerly awaited the start of European Hyperloop Week 2021 on 25 July in Valencia. Given the high coronavirus infection rate in the Spanish city at the time, however, many team members understandably decided not to make the trip. Although Handles Pi makes the mu-zero HYPERLOOP pod easy to transport (many teams need a crane), it was not taken to Valencia due to inadequate capacities at the venue. That didn’t get in the way of the team’s success, though – quite the opposite. It was still able to take part in the competition thanks to live images of the pod in action. The successful outcome speaks for itself. In its debut year, the mu-zero HYPERLOOP team not only came fourth overall and was in the top five in the drive, levitation and electronics categories – it also received a special mention for implementing a project of this complexity at the first attempt.

Soon after the event, the pod from Karlsruhe was able to demonstrate its practical viability on the 280-metre test track in Munich. “We pushed the pod to its limits, and it was great to see just what it is capable of and what it can withstand,” reports Döring. When the next season starts, new members of the hyperloop team will take over, but the current leading team members will continue to play an active role in shaping the future of mu-zero HYPERLOOP. “Quite simply, hyperloop is one big playground for engineers,” enthuses Ohnemus, who will help out with simulation and digital aspects. Working on the prototype also gives the team members the opportunity to gain unique practical experience during their studies. Working under coronavirus restrictions during the first season was a particularly valuable learning experience. Now that the system developed has proved viable, the next stage is to optimize the levitation and efficiency. The focus will therefore be on the levitation mechanism. The plan is to build a demonstrator in the form of a reduced prototype on a smaller scale. 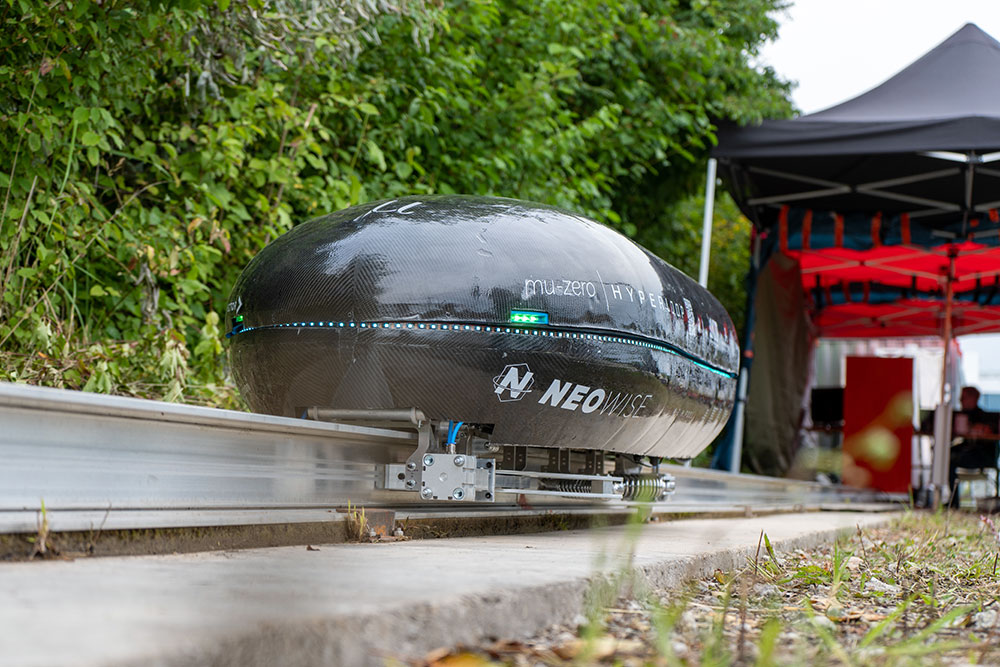 The hyperloop pod shows exactly what it is capable of on the test track in Munich.

Do you want to keep up-to-date on the latest cutting-edge item innovation, and receive it directly in your inbox? Simply subscribe by completing the box at the top right!