For many smaller companies, the concepts and terminology of digitalization are still pretty vague, as they tend to be explained in relation to projects of a larger scale.

That’s no reason not to go digital, though. What’s important here is to adopt a hands-on approach and have fun trying out new ideas. This is precisely what F&M Werkzeug- und Maschinenbau GmbH did. Founded in 2010, this Berlin-based business specializes in made-to-order manufacturing. Over time, the number of machines and the need for coordination at the company grew, prompting the team at F&M to look for a solution that would enable it to record processes automatically and map them out clearly. None of the applications available met the company’s requirements in full, however. So, in 2015, the team simply began developing its own solution, which has since launched on the market. Known as smartblick, this nifty system makes it possible to analyze CNC machinery with ease and thus make targeted improvements. 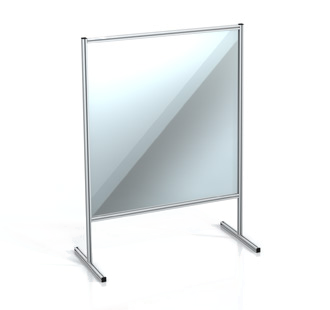 Discover our solutions for targeted hygienic protection with partitions and more – they are stable and reliable and offer enhanced hygiene and safety for you and your staff.

CHECK IT OUT NOW!

End-to-end compatibility and a straightforward connection

When using smartblick, it is irrelevant who built the machine, when it was built or what kind of control system it has. It takes less than 20 minutes to connect the contactless sensors of the “smartbox” to the relevant machine. And since this process can be performed while operations are still ongoing, there’s no downtime involved. There’s no need to tinker about with the controls or electronics either, meaning the solution is also suitable for leased machinery. Users can then monitor, analyze and readjust their machines from any location. In true digital engineering style, the smartblick dashboard used for this purpose can be accessed in a browser on any end device with internet access. On the dashboard, users can review information such as machine run time, spindle speed, energy consumption and free capacities. The relevant data and reports, which can be exported as CSV files, provide transparency. However, they also provide a good starting point for optimizing CNC machinery, as issues such as inadequate machine performance and available resources can now be identified on the basis of objective information.

Owing to its end-to-end compatibility with all machine manufacturers, smartblick is an appealing option for any company that is keen to maximize the potential of its CNC machinery. Since 2019, the system has been piloted by selected customers. Among them is AK Regeltechnik GmbH, which had been looking for a universal digital solution to reveal weak points in its production processes. At the time, the company had no overview of the downtimes in its machine park, for example. As is often the case, its machinery comprised a wide range of different machine models, meaning unlimited compatibility was an absolute must. Fortunately, as a long-standing customer of the Perschmann Group (the majority shareholder of F&M), the company’s attention was quickly drawn to smartblick. Today, the system is firmly integrated into its production processes.

Whether you’re on the shop floor, at the office or on the road – you can analyze data from your CNC machinery regardless of your location.

Going beyond machine optimization and looking intently to the future

Optimizing the CNC machinery based on data made it possible to bring orders that were previously outsourced to external service providers back into AK Regeltechnik’s workshops. Where once the in-house resources seemed insufficient, free slots can now be identified with pinpoint accuracy and put to the best possible use. The system not only plays a valuable role in the analysis and optimisation of production processes, but also when it comes to making investment decisions. Relevant data provides the management team with insights into the capacity at which staff and machines are working. Besides simpler workflows, staff particularly appreciate the chance to get actively involved in shaping the company’s digital future. In this context, too, it is helpful to remember what we have written elsewhere about digitalization in general – we mustn’t ignore the human side of things when examining digitalization. After all, the involvement of staff across departments is key to ensuring a company can complete its digital transformation.

Are you interested in digitalization and what the future of mechanical engineering holds?
Then we have something that’s right up your street!
Simply subscribe to the item blog by completing the box at the top right.