A world tour with aluminium profiles

From Germany to the Great Wall of China and Shanghai, then back home again.

Since the market launch back in 1980, the aluminium profiles in the MB Building Kit System have been used in a whole host of industries. There’s good reason for this, because they boast numerous advantages over steel frame constructions. In addition to being lighter than steel, aluminium is also extremely strong and resistant to corrosion. On top of that, innovative fasteners mean adjustments can be made to the aluminium profiles whenever required. But that’s enough theory – the important thing at the end of the day is the practical application of this profile technology. Projects on a spectacular scale demonstrate just how much companies and engineers around the world trust aluminium profiles from item. We’re keeping our feet firmly on the ground, though, despite the fact that two of the three projects detailed here really scale the heights. We’re equally happy working on small, local projects – as demonstrated by the third example. 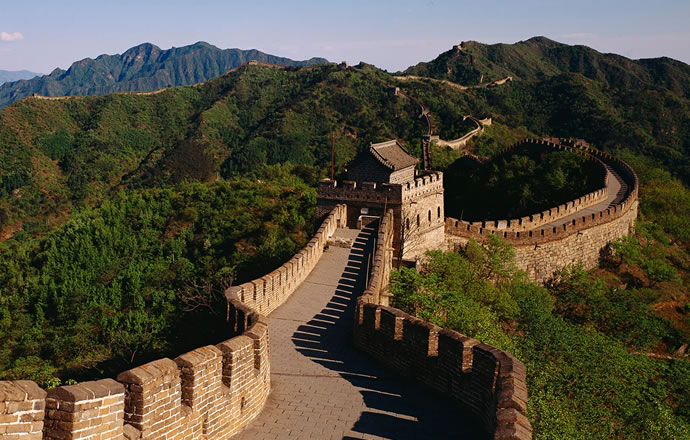 A cutting-edge cable railway for the Great Wall of China

Around nine million people visit the Great Wall of China every year, making it the world’s second most popular tourist attraction. A flourishing tourism industry has developed around this structure, which is one of the new seven wonders of the world. Cable railways are an excellent way of transporting visitors to remote parts of the wall. German company Josef Wiegand GmbH & Co. KG is currently building the Wie-Li® transport and adventure railway in the Shui Chang Cheng resort. This alternative to traditional cable car systems is designed to transport 500 people per hour to the Great Wall of China, covering a height difference of 113 metres over a distance of 290 metres. A framework comprising both curved and straight item profiles provides the basis for a safe and comfortable ride.

Boasting excellent wind resistance, Wie-Li® is rather like a cable car on rails. A version 1155 metres long is being used at the Great Wall of China, with two cables pulling a total of 21 six-seater carriages. Josef Wiegand is using lightweight variants of Line 8 aluminium profiles combined with Mitre-Fastening Sets for the carriage framework, which means the profiles can be connected together at any angle between 30° and 90°. The company has been using item solutions for numerous assistance systems in its products for many years now. “It was therefore clear we were going to work with item for our latest cable railway project as well,” underlines the departmental manager responsible at Wiegand. 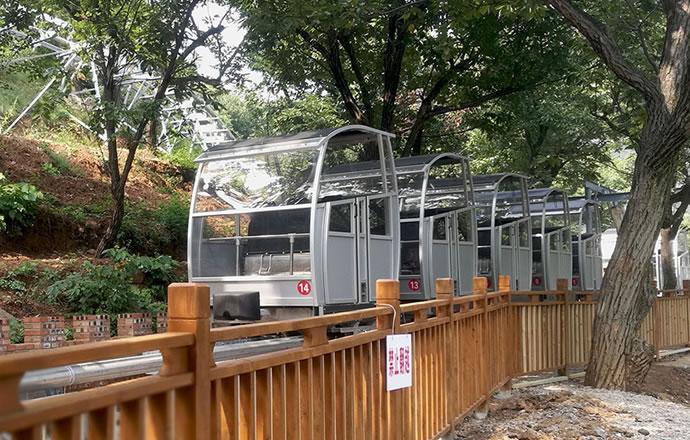 Specific measures need to be taken due to the challenging climate. For example, both low-flammability aluminium sandwich panels and highly weatherproof, impact-resistant transparent polycarbonate panel elements are located in the profile grooves. Matching Lip Seals secure the panel elements firmly in the grooves, producing smooth, unbroken exterior surfaces. Transparent polycarbonate panels form the front and back of the carriages, which have an open design from a height of one metre, and Josef Wiegand is using another item solution – C-Rail Systems – to guide the sliding doors.

Curved aluminium profiles were chosen for the framework for purely aesthetic reasons, but this meant additional factors needed to be taken into consideration. It was first necessary to clarify whether using curved profiles with Mitre Fasteners would provide the necessary stability. Right-angled connections ensure clamping force is optimally applied and the aluminium profiles are perfectly aligned. The mitre cuts have to be absolutely precise, too, so the inspection conducted by the Chinese authorities was particularly thorough. The verdict was unequivocal – the carriages are perfectly safe. With a follow-up project already about to start, another Wie-Li® will soon be transporting tourists over a distance of 900 metres to the sacred Huà Shān mountain. 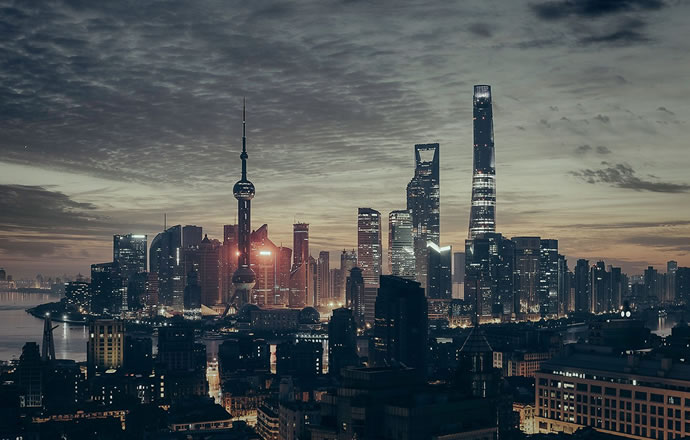 The MB Building Kit System’s profile technology also demonstrates its credentials day in, day out in another world-renowned structure that needs to withstand specific weather conditions. It helps protect the Shanghai Tower against vibrations. The architectural concept behind the world’s second highest building was the creation of a vertical “city within a city” comprising nine sections. A single section is made up of 12 to 15 floors. A dazzling range of boutiques, shops, gardens, conference rooms, offices and hotels awaits visitors, spread over a floor area of 380000 square metres. A total of 128 floors are interconnected by 149 lifts, three of which are the fastest in the world, notching up a travel speed of 65 kilometres per hour.

The most visually striking aspect of the building is its spiral shape, but that isn’t just a bit of fun – it’s highly effective in a number of ways. The final shape of the Shanghai Tower is based on an extensive series of wind tunnel tests. By factoring the test results into their design, the architects were able to achieve a 24 percent lower effective wind loading. What’s more, this special, stripped-down architecture helped to reduce costs by USD 58 million. But that’s not all – thanks to the spiral design, the building collects rainwater to be used in heating and air conditioning systems. 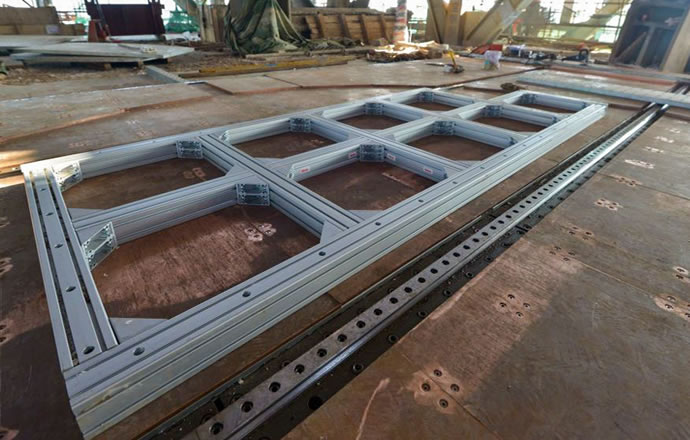 The Shanghai Tower owes its excellent stability to innovative technology.

Reaching for the skies with aluminium

However, it isn’t just the shape of the building that helps it withstand the tough conditions in Shanghai. A 1000 metric ton weight is located between the 125th and 126th floors. This is suspended from 12 steel cables so that it can oscillate when subjected to vibrations. Underneath the weight are plates of pure copper that are fastened to the reinforced concrete floor using item profiles. Huge permanent magnets on the weight help to induce eddy currents in the copper plates, thereby generating a magnetic field that works in the opposite direction to the weight to generate a contactless braking effect – even during a power failure. The principle of the eddy current brake means the Shanghai Tower is largely resistant to external vibrations.

Building this solution with steel supports wasn’t an option, as these would have been permanently subject to attraction. Unlike iron, aluminium is paramagnetic. The holding force of the profiles ensures the copper plates can withstand the enormous force of attraction from the magnets long term. In fact, the magnets are powerful enough to lift an aircraft weighing 300 metric tons. However, the robust aluminium profiles stop the magnets and copper plates from coming into contact and thus maintain the braking effect. Chinese and Japanese profiles were also tested beforehand, but the end result was clear: “In our comparative test, item offered the best quality,” underlines Qian Feng, deputy architect in chief of the Shanghai Tower.

Steel not an option

The low weight of the profiles proved to be another crucial advantage, as they had to be lifted to a height of 600 metres by a tower crane and then carried seven floors down by hand. Had steel supports been used, it would have taken more than three times as many construction workers to move them into position. What’s more, no additional auxiliary equipment such as cranes or lifting platforms was required when fixing the profiles in place. Nevertheless, the aluminium design boasts the same strength as 304 stainless steel and even Q235A steel. 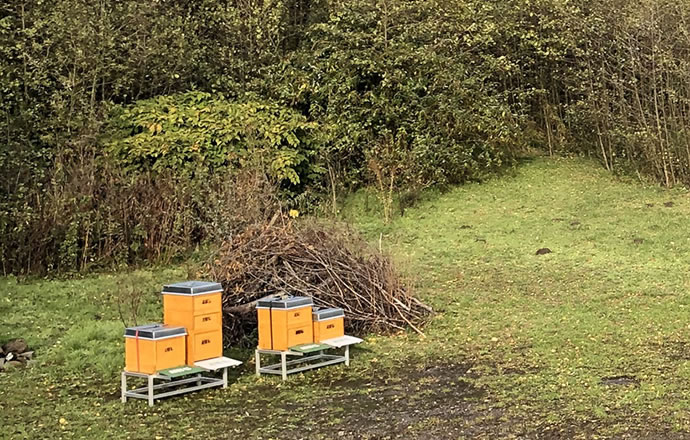 Such international showcase projects aren’t the only ones to demonstrate the versatility of aluminium profiles from item. A wildlife sustainability project initiated in Wuppertal, not far from item headquarters in Solingen, provides another example. The habitat of bees is steadily dwindling, so AWG Abfallwirtschaftsgesellschaft mbH Wuppertal (AWG) took the step of providing four bee colonies with a wonderful home on an abandoned industrial site. Contact with two local young beekeepers revealed that they were looking for new locations for their hives. They were thoroughly impressed with the site. An agreement was quickly reached, and AWG undertook to supply the subframes for the hives. 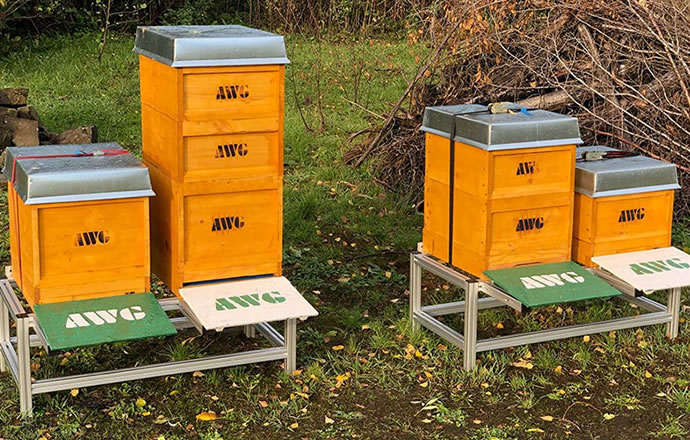 The aluminium subframes provide the bees with perfect protection.

As one of the beekeepers works as a designer at a Wuppertal industrial company, he had his own ideas to contribute. “He naturally knew about item profiles and, when he has something to build, that’s exactly what he uses. After all, he knows how versatile and stable they are,” says Willy Görtz, deputy operations manager at AWG. Although wood was initially considered for the subframes of the hives, it is prone to weathering and would need to be replaced on a regular basis. Durability and stability were precisely the reasons for our aluminium profiles being chosen or, to be more specific, for the subframes being built using Profile 8 40×40 light, natural.

In this particular bee project, each hive consists of three floors (frames). Hives are sealed at the top with a cover, which also provides protection from the weather. By contrast, the base has an entrance hole – hence the need for it to be raised by using a subframe. The lower section houses the brood chamber, followed by the honey super, where the honey frames are suspended. These frames are made of wood and are where the bees create their famous honeycombs. Two hives, which are so important for honey production, fit onto each subframe. Once they had been built, it became clear that the hives needed additional “landing boards” to make it easier for arriving bees to land and get in. To accommodate the boards – which are around the size of a sheet of A4 – profiles 30 centimetres long were therefore added to each subframe.

As the three examples provided above illustrate, companies use the MB Building Kit System for many different reasons. Flexibility, durability and stability often play a key role in their decision, and the weight factor really came into its own in the case of the Shanghai Tower. Using steel would have made the project overly complicated. At the end of the day, the all-important idea that marked the start of the MB Building Kit System – using aluminium instead of steel – is thus as innovative as ever.

Do you want to keep up to date on the various ways that item solutions are being put to use? Then we have the perfect solution for you. Simply subscribe to the item blog by completing the box at the top right!