Robots have all kinds of advantages in industry. Amongst other things, they enable the automated production of small batch sizes, ease the strain on staff, improve quality standards, and boost customer satisfaction.

Despite the numerous advantages of robots, many industrial companies totally ignore robotics when it comes to finding a straightforward, cost-effective solution to a specific problem. In most cases, this is because it’s comparatively hard to get started when using conventional industrial robots, especially with regard to programming. State-of-the-art lightweight robots, on the other hand, are a far more beginner-friendly solution and are even more flexible in certain respects. The compromises associated with lightweight construction in terms of load-carrying capacity and speed are negligible for many applications and, much of the time, the robots’ versatility makes up for this – not least because lightweight robots also open up the advantages of robots in industry to small and medium-sized businesses.

Get your copy now!
.

Get your Whitepaper now!

Their very name indicates a further advantage of lightweight robots. Weighing in at well under 40 kilos in most cases, they are extremely light. Given an appropriate base structure, this means they are easy and convenient to move – a big plus when you consider, for example, that it’s possible to use a robot in palletizing and then as a welding robot for small series. This versatility is without doubt one of the main advantages of robots in industry – all the more since their applications mean they not only reduce workloads in many situations, but also become enablers. An example from item itself illustrates this perfectly. Incorporating a lightweight robot was a cost-efficient solution for the semi-automated production of extremely small series.
One particular advantage of robots in industry is obvious but no less important for being so – they don’t get tired or need breaks and it’s no problem for them to take on an extra night shift. This aspect is not to be underestimated, especially by SMEs who are finding it increasingly difficult to sustain multiple-shift production, even though their order books are healthy, due to growing staff shortages. These extra periods can be used primarily for production and assembly activities or pick-and-place tasks for individual components, utilizing the robot for certain aspects of preparatory work. That means staff can get off to a flying start when they come on shift – and companies can make better use of their machinery and plant, too.

With the right base structure, [lightweight] robots can realize their full potential – from collaborative work benches and partially enclosed cabins all the way to mobile robot islands for operations such as machine loading.

According to the German BKK health report for 2020 , the manufacturing sector recorded around 19 lost working days per employee in 2019. Over a quarter of these, 27.6%, were due to musculoskeletal conditions, which puts the sector 3.3 percentage points above the industry average of 24.3%. It’s a well-known fact that employees in industry often have to adopt unnatural positions. Frequent bending, lifting or turning and standing for long periods are also part of their everyday working lives. In addition to causing various ailments and absences from work, this also results in loss of motivation, which in turn hits productivity and quality. Using robots in industry offers a number of advantages in this context.
The advantages of robots in industry are ideal for providing valuable skilled workers with long-term protection. Tasks requiring staff to make unergonomic movements can be delegated to robots. Although lightweight designs aren’t as powerful as industrial robots, models such as Universal Robots UR16e are entirely capable of lifting loads of up to 16 kilos, which is sufficient to quite literally lighten the load on staff in many areas. Industrial work bench robots don’t just indirectly result in higher productivity and quality, though. Their precision and repeat accuracy also reduce the number of rejects and ensure consistently high product quality, which in turn improves customer satisfaction – and that pays off! On the Universal Robots blog, for example, plastics processor VEMA reveals that the payback period for its cobots has been less than two years. 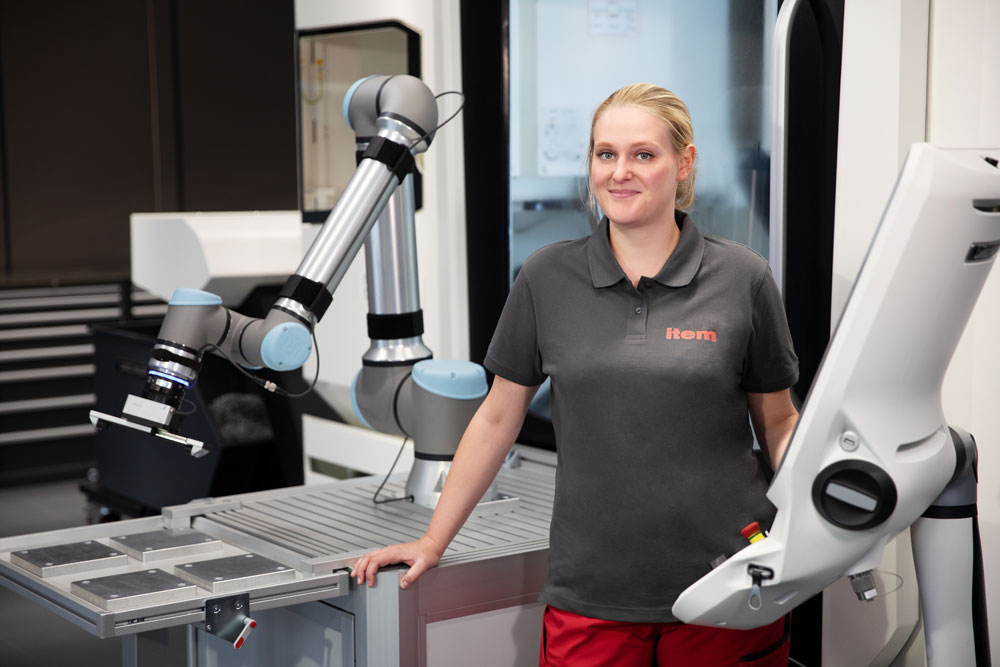 Staff need to be on board to be able to make full use of the advantages of robots in industry, so it’s important to involve them early on when integrating robotics.

How to Successfully Incorporate Robots in the Workplace

Despite all the advantages of robots in industry, there’s one potential drawback that shouldn’t go unmentioned. Some staffs are sceptical about robots in the workplace, because they’re concerned about being replaced. Adopting a different perspective and/or taking a fresh look is often helpful in such cases, especially in the context of lightweight robots and human-robot collaboration. Robots aren’t necessarily a substitute, but a more versatile tool that staff can use to carry out work they consider to be strenuous or even just tedious. While the cobot does this work, staff can take care of what they deem to be more meaningful, value-adding tasks. Just as a cordless screwdriver doesn’t replace the user but simply speeds things up, a robot doesn’t necessarily replace staff just because it takes care of some of their tasks.
Involving staff as early as possible is also helpful in gaining acceptance for robot solutions in industrial environments. This can be done before the actual robot is even purchased, for example, by gathering ideas from staff in all departments concerned. Where could the robot be used? And where would it be most effective in lightening the load on employees? Once the robot has arrived, staff can be introduced to the machine (possibly even in the form of a game). This means they can be involved in operations such as programming and try out the functions. The more they know about the robot and its potential, the likelier it is that staff will independently come up with further ideas for how robots can support the workforce. Incorporating robots into production is often even a positive criterion that leads young applicants to opt for a particular potential employer, as they are open to new technologies and to actively preparing for the future.
Want all the latest updates on innovative robotics applications? Subscribe to the item blog by completing the box at the top right.
Previous Next